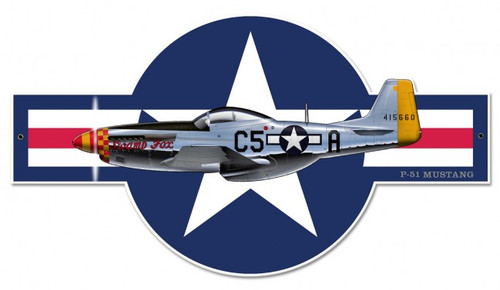 A UNIQUE PIECE OF WALL ART FOR OUR FANS OF MILITARY AIRCRAFT.....The North American Aviation P-51 Mustang is an American long-range, single-seat fighter and fighter-bomber used during World War II and the Korean War, among other conflicts.  This aircraft was used by the USAAF'S Eighth Air Force to escort bombers in raids over Germany during WWII.  At the start of the Korean War, the Mustang,  was the main fighter of the United Nations.

This P-51 Mustang metal wall art measures 30 inches by 17 inches and weighs 6lb(s). This metal wall art is hand- made in the USA using heavy gauge American steel and a process known as sublimation, where the image is baked into a powder coating for a durable and long lasting finish.