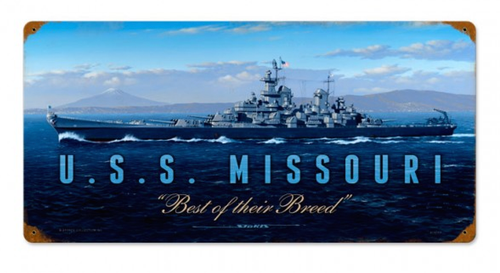 THE POWER OF THE MIGHTY MO!!  The USS MISSOURI...THE BEST OF THEIR BREED!   Born in the midst of World War II, the shipyard workers at Brooklyn’s New York Navy Yard constructed the battleship in time for her launch on January 29, 1944.  She was the site of the official Japanese surrender of World War II; now a floating war memorial at Naval Base Pearl Harbor, Hawaii. The USS Missouri was the third U.S. Navy ship to be named after the Show Me state and the fourth American warship to bear the name. Today, a Virginia - class submarine, USS Missouri (SSN-780), commissioned in 2010,  has the honor of being the fourth USS Missouri and carrying the Missouri legacy into the future.

"THESE MEN WHO ENLIST IN THE NAVY" METAL SIGN