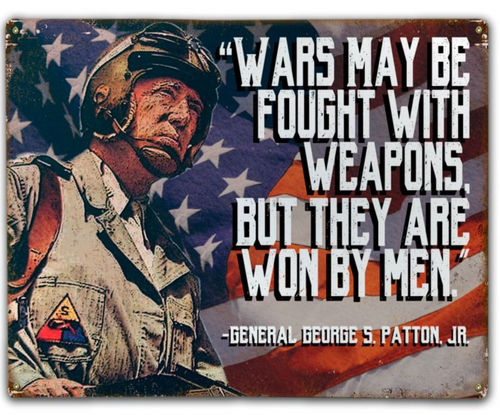 A special tribute sign to an outstanding American General.  This 12" by 15" metal sign is made in the U.S.A. and features a quote from General George Patton. He commanded the Seventh United States Army in the Mediterranean theater of World War II, and the United States Army Central in France and Germany after the Allied invasion of Normandy in June 1944.  A nice gift for a Veteran or for a student of WWII history.

( Note...we know today that wars are also won by women who deploy to combat situations, but during WWII, when Patton was serving, he was commanding armies of only men !  )

"FREEDOM IS NEVER GIVEN-- IT IS WON" METAL SIGN