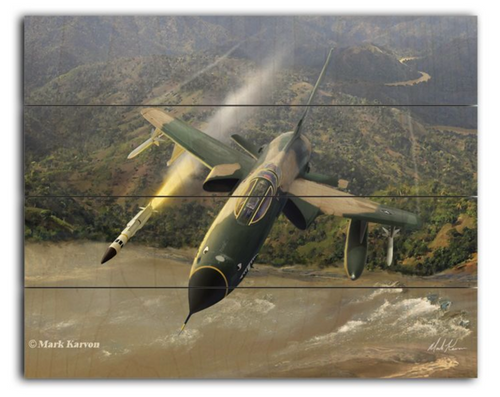 When the Thunderchief F-105 entered service it was the largest single-seat, single-engine combat aircraft in history, weighing approximately 50,000 pounds It could exceed the speed of sound at sea level and reach Mach 2 at high altitude. The F-105 could carry up to 14,000 lb  of bombs and missiles. The F-105 was commonly known as the "Thud" by its crews.  Two Wild Weasel pilots were awarded the Medal of Honor for their extraordinary feats in this aircraft.  This dramatic image on 12 by 15 inch planked wood art is made in the U.S.A.

MADE IN THE USA--- PATRIOTIC MASK